In Santa Fe, New Mexico, the late midcentury designer Alexander Girard and his wife, Susan, are local legends. Their presence is a permanent fixture at the Museum of International Folk Art (MOIFA)—where a display of more than 10,000 toys, folk-art objects, and other curios from their personal collection have delighted children and adults alike since 1982.
The vivid gallery wing displays dioramas, toys, figurines, textiles, and more informal taxonomies and vignettes, representing vernacular crafts from more than 100 countries across 6 continents. They fill carefully color-coded vitrines, sit atop plinths, and hang from ceiling beams that, too, have been custom-painted in a bright palette of colors to draw the eye upwards. None of the items are accompanied by wall texts or identification labels; they are meant to be experienced on a purely visual level. 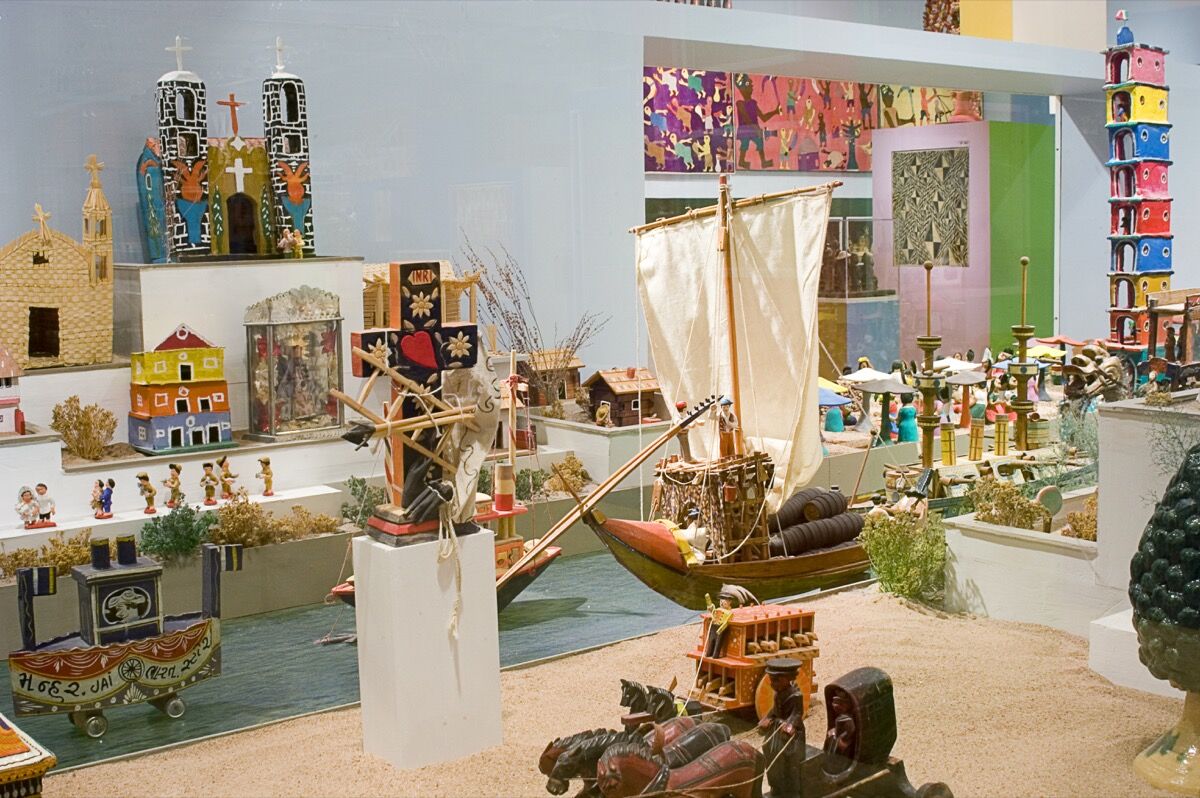 Installation view of “Multiple Visions: A Common Bond” at MOIFA. Courtesy of MOIFA.

The exhibition is just the tip of the iceberg to the 106,000 objects that comprise the Girard collection. Though the architect and designer might best be known for his prolific career producing upwards of 300 designs for American furniture manufacturer Herman Miller, this collection is easily Girard’s magnum opus: a love letter to the world’s folk art and crafts that deeply informed his practice.

To understand the core of Girard’s colorful and expansive oeuvre is to look to Santa Fe, where he relocated in 1953, and spent the next four decades of his life until his death in 1993, at age 86. Born in New York to an American mother and a French-Italian father, Girard was raised in Florence, studied at the Architectural Association School of Architecture in London, and built his early career in stints in Paris, Stockholm, New York City, and Detroit. 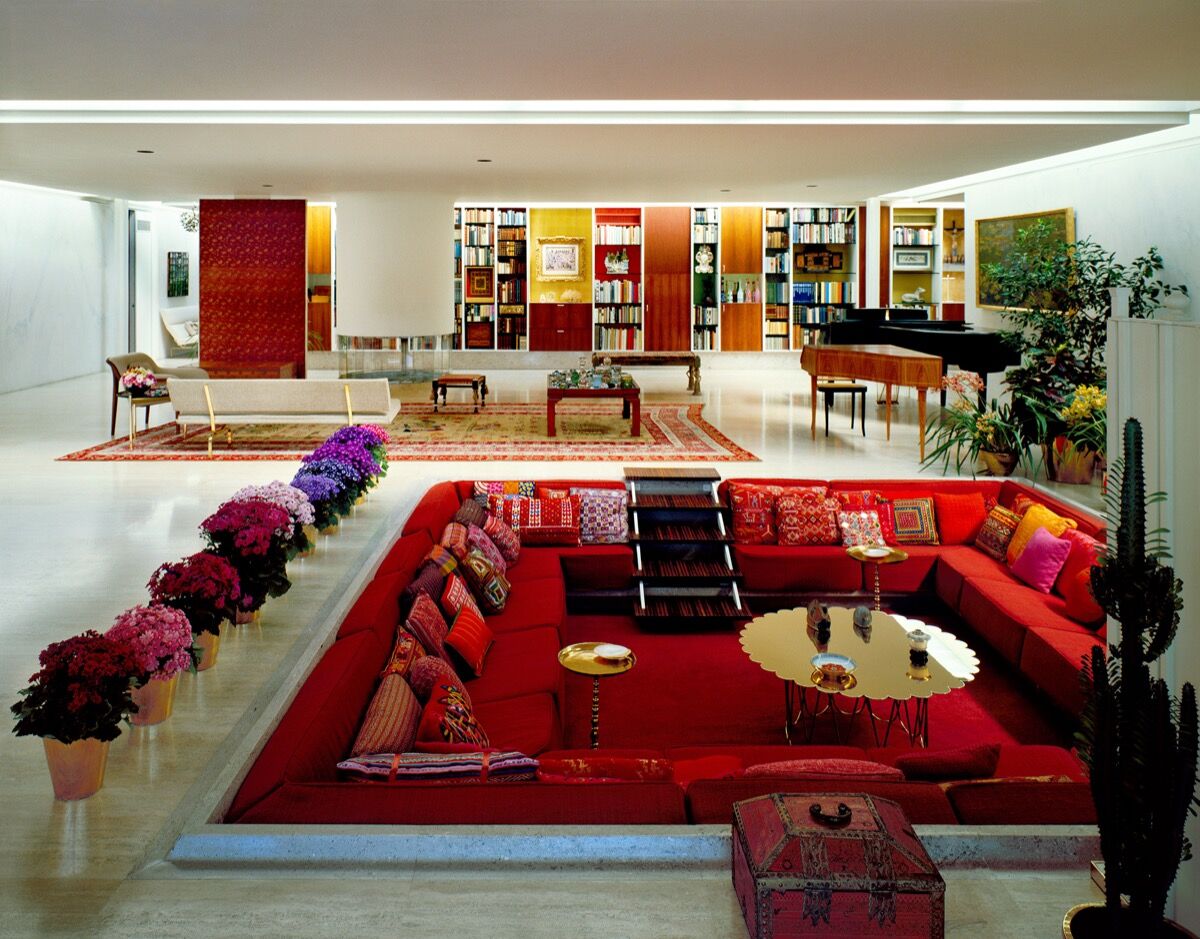 “Girard was really a world citizen,” said Jochen Eisenbrand, chief curator of the Vitra Design Museum (VDM) who organized the comprehensive survey “Alexander Girard: A Designer’s Universe” that is concurrently on view at MOIFA, with more than 300 works displaying the breadth of his design practice. Though the touring exhibition includes museums from Palm Springs to Seoul, its current stop in Santa Fe has been particularly resonant for both locals and the Girard family.
“The exhibition coming to New Mexico has been some 25 years in the making, something that began when we were still teenagers here,” said his granddaughter Aleishall Girard Maxon, who co-directs the Girard Studio with her brother, Kori Girard. “This was his chosen home, and it’s where he really wanted to have all his work really held and shown to the world.” 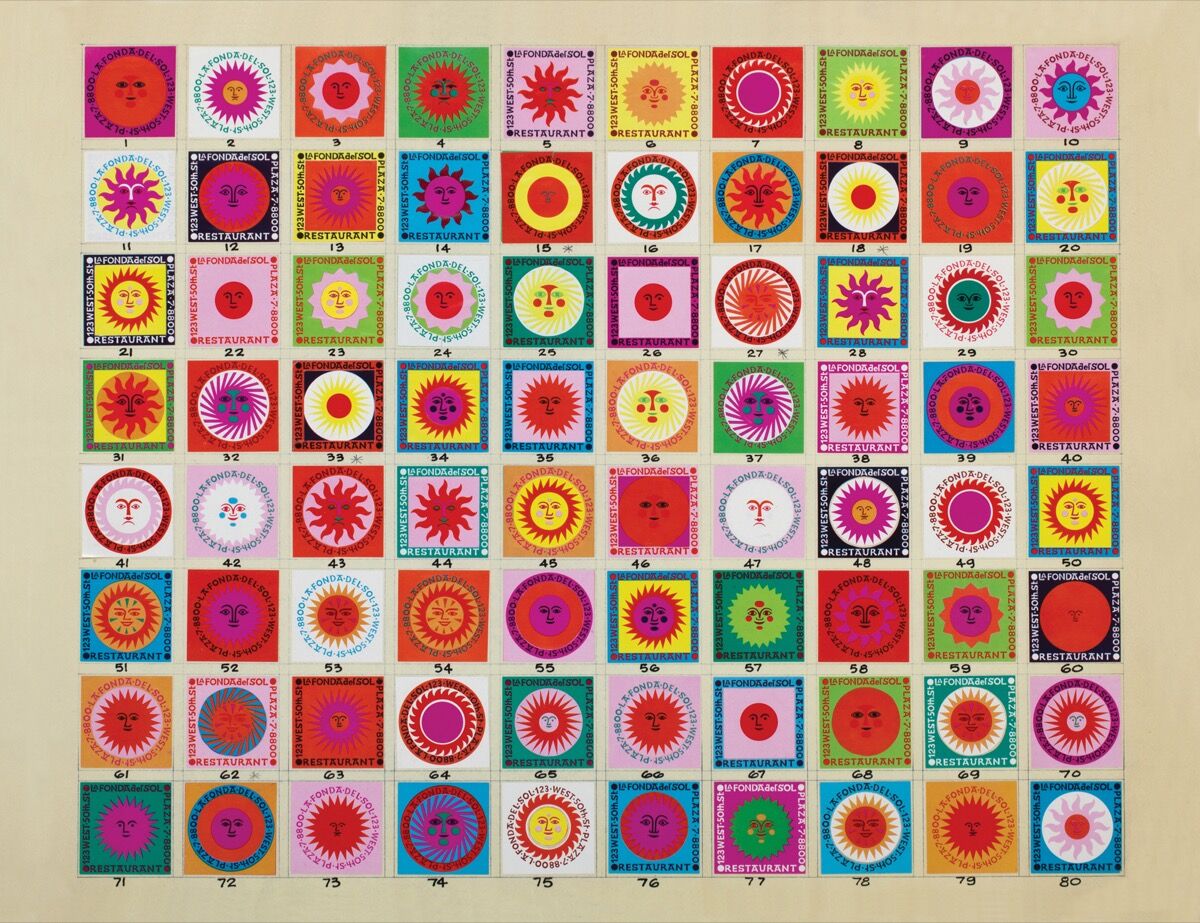 When Girard and Susan made their home in the Southwestern city, they had already been amassing a substantial folk art collection for nearly 20 years, beginning with their honeymoon to Mexico, a locale they would visit on numerous occasions. Like many artists—including Georgia O’Keeffe, who became a close friend—Girard was drawn to the Santa Fe way of life, and it was here, away from the bustle of his previous home cities, that he produced the bulk of his career-defining work. During this era, he directed Herman Miller’s newly established textile division for more than two decades, bringing verve to an often subdued aesthetic. Mixing high and low, pop and folk, and craftsmanship and industry, his graphic work imbued a vividly warm and colorful opulence to more than 300 textile and wallpaper designs, not to mention a range of interiors, furnishings, and objects. In Girard’s mind, modern design was “a way of liberating yourself from pursuing historic styles to live up to some imagined social status,” says Eisenbrand. “Modern was simply about living today and being contemporary.”

Along the way, he produced prodigious bodies of work with companies including Braniff International Airways and John Deere. He masterminded the vibrant interiors of the famous Miller House, designed by Eero Saarinen in the mid-1950s, not to mention his own residences in New York City; Grosse Pointe, Michigan; and Santa Fe. He also designed whole environments, from the furnishings and fixtures down to the menus and salt shakers—and sometimes the uniforms—for several Manhattan dining destinations; they included the original Latin American–themed Fonda del Sol and L’Etoile at the Sherry-Netherland Hotel, a favorite of Andy Warhol. Girard’s last extant restaurant design, The Compound, located in a former adobe home, can still be visited in Santa Fe, where it has been in continuous operation since 1966.
Informed by a range of cultures and the visual language of folk art, Girard’s prolific work imbued the sober minimalism of classic 20th-century modernism with vibrant color, pattern, and a distinct sense of craftsmanship and joy. As Mateo Kries, director of the VDM, writes in the exhibition catalogue, “the International Style had provided the world with buildings and furniture as reduced as the works of Piet Mondrian and as functional as machines.” 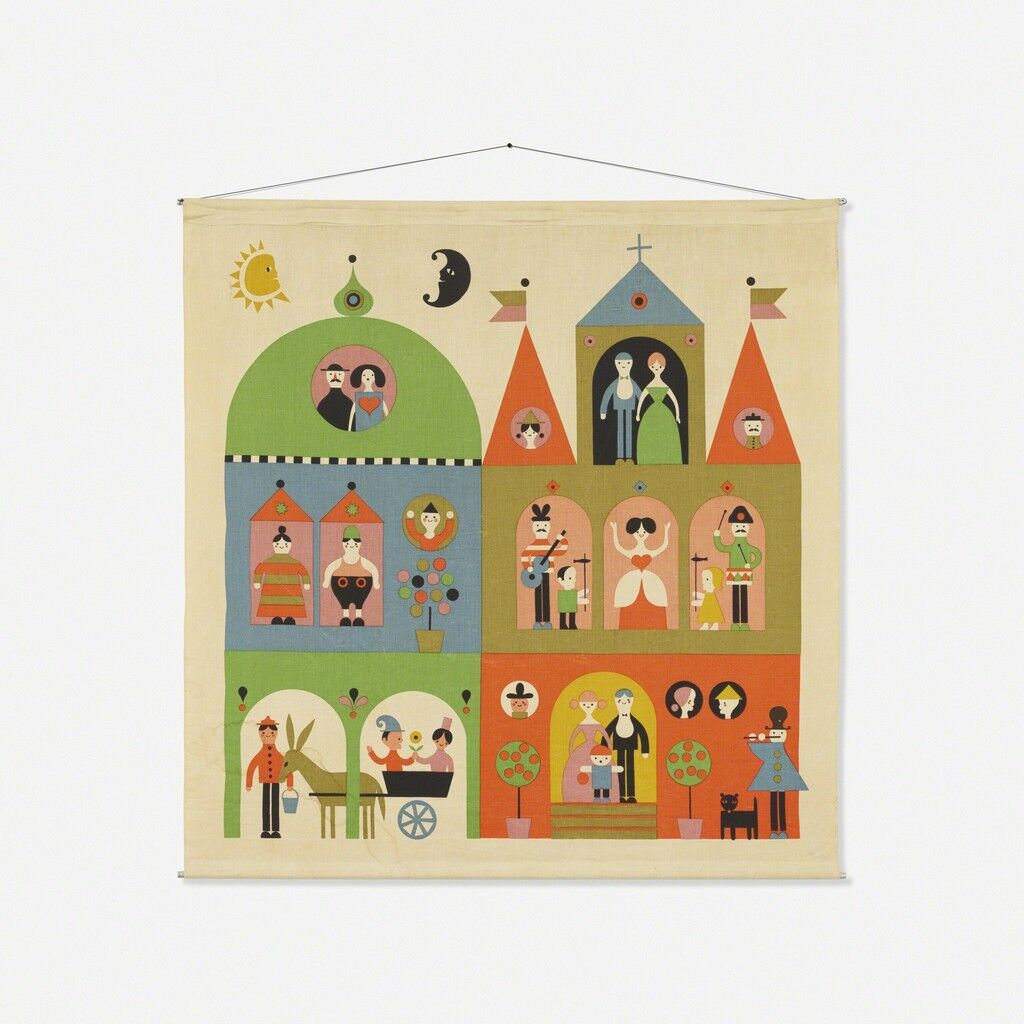 Girard’s work, by contrast, had been developed with a sense of play and spontaneity—though it was every bit as rigorous. His output was just a glimmer of the amount of collecting, cataloging, and arranging that continued almost obsessively at home and in the studio, where the display of objects was constantly shuffled and updated as new items were found and acquired, and items were meticulously stowed away in boxes categorized by fabric swatches and labels ranging from “old hardware” and “end papers samples” to “Mexicotton yellow filler cuttings.” These boxes, along with Girard’s personal estate, were acquired by Vitra in 1996, and continue to be a trove of design discoveries. It was while browsing the archives, for example, that Aleishall and Kori uncovered Girard’s painted wooden dolls, originally designed in 1953 to decorate his own home, and brought them out of the vault to have them reproduced.
Vitra and the Girard Foundation have continued to reissue additional works in recent years, including the International Love Heart—a typographic pop graphic that features the word “love” in a range of languages, telegraphing a message of peace and unity across cultures and borders that remains every bit as relevant today, nearly six decades on. As far as proverbs go, Girard was particularly fond of an Italian one—Tutto il mondo è paese:The whole world is hometown.